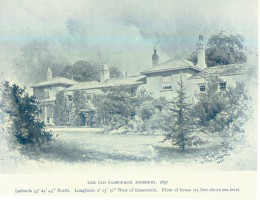 Once the home of Fletcher Moss who did so much to shape the modern Didsbury.

The building may have its origins around 1650.  In 1865 Fletcher Moss, then aged 22, moved in with his parents and siblings and he subsequently bought the house in 1885. The Moss family made their money from being corn factors and had their offices at the Corn Exchange in Manchester. He died in 1919 after an active life of public service and was renowned for his in-depth writing on local history, travel, flora and fauna and local people.

On his death in 1919 Alderman Moss bequeathed the house and gardens to the City of Manchester because he wanted the house and its contents to remain, as far as possible, intact “to show what a comfortable house of the olden times was like”. Unfortunately, the house became difficult to maintain and in 1922 many features, including stained glass and fireplaces, were removed.

In the fine gardens can be seen the graves of several of Fletcher Moss’s dogs, under the yew tree in the shrubbery fronting the house.

As an ‘economic measure’, the City of Manchester closed the gallery in 1978. It was then used as council offices until 2011. Didsbury Civic Society started a fundraising effort to raise the money to renovate the house and formed a separate charity (owned by the DCS). Over £160,000 was raised and the house was opened in September 2012 as a community space. It is leased to the Trust by Manchester City Council. It has been a major success as a centre for the community, housing classes from children’s drama to art, from lace-making to yoga. Many of the U3A classes take place in the building. It also hosts business seminars, weddings and arts events. In the spirit of its time as a much loved Art Gallery there are ever changing art exhibitions by local artists. As a community space it provides rooms for local group meetings, hosts community events and is now an integral part of the Didsbury community. Its gardens have won several local and national awards having been restored and maintained by the Friends of Fletcher Moss Park and Parsonage Gardens.