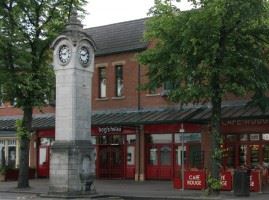 A memorial to Dr J Milson Rhodes, philanthropist and carer of the poor.

This memorial is to Dr J Milson Rhodes (1847-1909), who did much for the poor, particularly the young people assigned to the Nell Lane Workhouse and those suffering from TB.

He was responsible for the founding of a colony for epileptics at Langho, near Whalley in Lancashire, to which the epileptics from the Workhouse were transferred.

At his suggestion children were removed from the workhouse to cottage homes at Styal.

In the year following his death, as a tribute to Dr Rhodes, a memorial clock and drinking fountain were built outside the railway station, which was closed in 1964 and subsequently demolished. The clock is inscribed with the words: ‘A Friend to Humanity’.