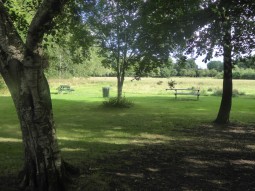 Fog Lane Park is a large community park with many facilities including several football pitches and other attractions.  It is located a short walk from Didsbury village centre.

Fog Lane Park is off Fog Lane. Didsbury.  It was purchased in 1926 by the Council and was one of first public parks in Manchester.

It is said that Fog Lane Park earned its name from a grass, commonly known as ‘Yorkshire Fog’ which still grows throughout the park.

The site is comprised mainly of grassland and woodland, but also contains two small lakes, shrub beds, scattered trees, rose gardens and a sensory garden and children’s play areas. The park is particularly suited to football, having several pitches and a large grassed area.

Fog Lane has an area dedicated to the growth of wild flowers. These attract wildlife such as butterflies, dragonflies and a large selection of insects.  In turn, these provide food for a wide variety of birds which visit the park and are then encouraged to nest.  These include mallards, moorhens, Canada geese, kestrels, wood pigeons, coots and the occasional heron, plus the latest additions – ring-necked parakeets.

The park has a variety of trees and shrubs, including dawn redwood, silver birch, laburnums and flowering crabs, as well as a number of unusual specimens which have reached maturity, including hornbeams, alders, poplars, Norway maple and Indian bean.

Fog Lane Park Bowling Club and the Friends of Fog Lane Park actively work with Manchester Leisure to improve and promote the site.