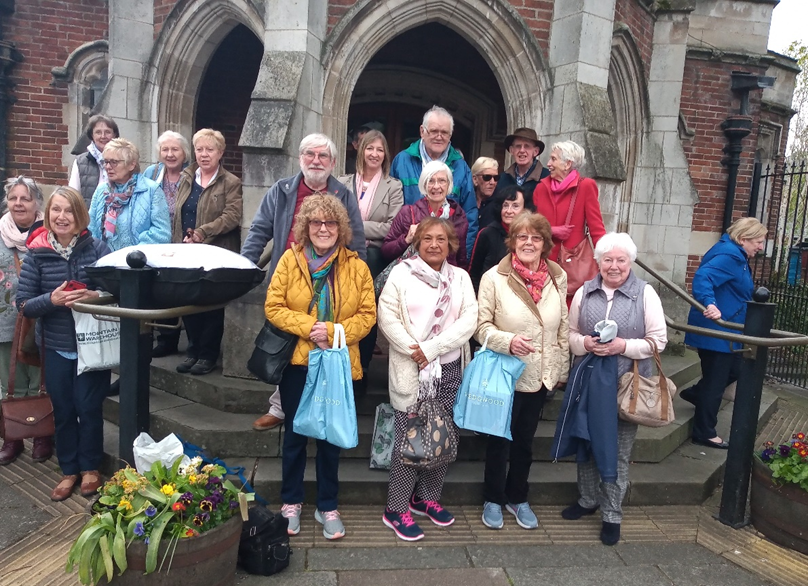 On Thursday 28th April 2022 the DCS organised a further social trip into the potteries with 39 travellers in attendance, meeting at the usual collection points from 8:30 at Didsbury Library and then onto Parrswood Road Methodist Church.

After negotiating the stop start from Parrswood Road into Wilmslow Road and the Didsbury Triangle, we were away, making good time down the M6 to Trentham Gardens and arriving just as the shopping units were opening, allowing us to have an uncrowded look around, partake in welcome refreshments and of course spend some money with the famous names.

Then onboard the coach for the short journey to the very friendly New Florence pub for a superb carvery lunch at midday, which was well cooked and presented along with great service. Well-fed and watered, we reboarded our coach for the short journey to Wedgwood Pottery for their Museum and the grand tour of the factory to see The World of Wedgwood, plus the shop Outlet.

The Wedgwood Museum tells the whole story about the making of the famous name sakes. It tells the history of the family name, the well-known quality and marketing plus the high skills of its employees in hand decorating them, the use of paint containing gold, through to their dispatch on their long journeys around the world in straw filled barrels.

The museum contains past documents on design which are regularly referred to rather than “why re-invent the wheel” if you have already done most of the work in a previous era. We also learnt that Josiah Wedgwood was an active member of the Lunar Society of Birmingham, a very elite dining club, and an abolitionist against slavery, in those dark and polluted days in the Potteries.

We also learned the meaning of a “Saggar makers bottom knocker” who was a young boy, who made the base of the saggar which was used to stack the newly created pottery in allowing firing to take place. His main job was to knock the fireclay into a metal ring with a wooden mawl (a mallet) to make the base of the saggar of which many were used at a time in the large bottle kilns.

The writer finished the afternoon in the exquisite café for a cup of breakfast tea from their best everyday tea service.

Finally, a big thank you to Gordon and Margaret for their time and all their efforts organising another great Social Trip for the DCS on behalf of its members. Also, to the members and friend`s groups for making the trip another success.  With best wishes   The Trustees